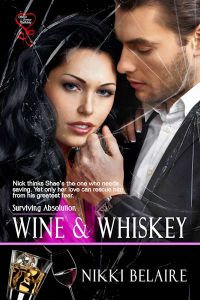 Welcome to the latest in a series of author interviews. Today fabulous romance author Nikki Belaire shares her insights into the lifestyle of the rich and famous, talks about writing characters that surprise us, and gives us a glimpse into the sequel to her wonderful novel Wine and Whiskey.

Sarah: In a few sentences, can you tell us about your debut novel Wine & Whiskey?

Nikki: Wine & Whiskey is a contemporary romantic thriller featuring characters who aren’t what they seem at first. As a mob boss, Nick swears and kills; Shae’s a pop star, used to being handled. The first time they meet he rescues her from an aggressive fan. Yet, despite the circumstances, there’s a resilience to her that intrigues him and a gentleness to him that surprises her. I want readers to see the people they truly are regardless of the fame, wealth, and power.

Sarah: In Wine and Whiskey, you introduce us to a dangerous crime boss with a heart of gold. Was it difficult to reconcile the violent criminal with his tender, caring side?

Nikki: Not really. All of us are complex, defined by our pasts which impact how we behave and respond to others. I loved showing Nick through Shae’s eyes. She can see the good in him even if he can’t.

Sarah: You’ve written a book about fabulously wealthy people. Did you have to do much research into that lifestyle? Was it fun to learn about? 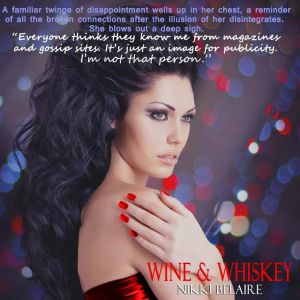 Nikki: The story was inspired by a photo in a gossip magazine I flipped through while waiting to get my hair cut. A well-known pop star huddled against a hard core body guard as he guided her through the airport. Her expression conveyed a loneliness and fear that stuck with me for days afterward.

Here this popular, beautiful, rich, young woman was essentially alone, except for a person who was with her only because he was paid to be. It made me realize that all we believe to be true about celebrities may not be. I wanted to explore the real story behind the facade.

I spent a lot of time on social media and watching entertainment news trying to dig deeper. It was fun, but eye-opening. Some celebrities can barely wipe their own noses, while other are regular people who pump their own gas and eat Taco Bell. I tried to show both with Shae. Since she’s been young, she’s always been handled, but if left to her own devices she can take care of herself just fine.

Nick was a little bit more difficult to research. We know the characterizations of mob bosses from movies and TV shows, but I wanted to show the day to day stuff as well. How do they spend their free time? Do they have hobbies? Is there any guilt or are they jaded? I ended up reading some old FBI files which were pretty fascinating.

Sarah: You write about characters that are very much held back from forming intimate relationships by their past relationships with their dysfunctional families. Do you think Nick and Shae will ever be able to bury their ghosts? Or will the issues caused by their parents come up again and again as they try to build a family of their own?

Nikki: You’ll have to read book two and find out! The issues never completely go away. Letting go of the past is difficult. Yet, they do find a way to be happy together despite the guilt and doubt driven from their pasts. 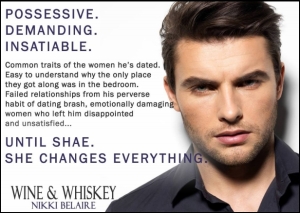 Sarah: You’ve titled your series “Surviving Absolution.” The obvious interpretation of this title (to me) is that Nick, a violent criminal who fears the violence in himself, might find absolution with a pure-of-heart woman. But as I read, I wondered if there was more to it. If the woman herself might also be seeking forgiveness, in her remarkably selfless and noble interactions with the world. Can you give me your take on the series title?

Nikki: You’re very perceptive. It’s not just about Nick’s guilt, but Shae’s as well. The entire series features characters who have challenges to overcome so they can be happy. With themselves and the people they love.

Sarah: This is your first novel, and it was traditionally published by Secret Cravings Publishing. Can you tell the aspiring authors reading this blog a little about your publishing experience?

Nikki: It’s wonderfully terrifying! Writing is hard, and editing is even harder. Then you submit to publishers, sending out your baby to be judged. I was very blessed to receive several offers. Once I caught my breath and selected a publisher, then the other side of the job started – marketing and promoting. I love it, but spreading the word about a book takes a lot of time and patience. It can be a full time job sometimes. But the good kind, where you love going to work everyday and always have a smile on your face. Even with all the ups and downs, I have no regrets.

Sarah: Finally, I was very excited to hear there’s a sequel in the works. Can you give us a hint of what’s to come?

Nikki: Thank you! I’m so glad you liked it.The second book is a continuation of Nick and Shae’s story. They have one more obstacle to overcome to solidify their relationship while also fighting the challenges stemming from their careers. The second story also ties up the loose ends from Book One. Some characters reappear with their own agendas which could impact Nick and Shae’s happiness. There are a lot of twists and turns, but I think readers will be satisfied with the ending.

Thank you so much for being with us, Nikki! If you’re interested in reading Wine and Whiskey, pick it up here: