Psychopaths can be tricky to write, because it’s not always easy (I hope!) to get into the head of someone who lacks remorse, empathy, and a sense of morality. Psychopathy is often a misunderstood concept, even among psychologists. So here’s a little guide to help you come up with the perfect psychopath, evil laughter included. 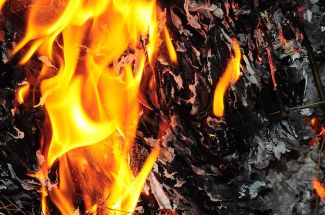 Psychologists once thought that setting fires as a child was an indicator of a psychopath.

Well, it depends on who you ask. Psychopathy is probably one of the most ill-defined and variable terms in psychology. Most often, though, it means someone who is antisocial, who has a reduced capacity for empathy, who feels little or no remorse, and who is less socially inhibited than the average person.

What does this mean for a character? They’ll be someone who is not only destructive, but also has a hard time caring about or relating to other people’s emotions. They might burn down a village, for fun or for profit (or both), and when the villagers are crying outside the charred remains of their homes, a psychopath might not feel a drop of remorse.

In the 1970’s, Robert D. Hare developed a checklist to measure psychopathy. This checklist is still used today, to assess high risk prisoners, and to attempt to measure how likely criminals are to re-offend.

Although its accuracy is debatable, based on a number of recent studies, it’s still chock-full of great ideas for creating a fictional villain. It’s based on four facets of personality and behavior.

Psychopaths tend to be charming and manipulative, cunning and clever. They might have a grandiose sense of self-worth and be pathological liars. This might explain how a psychopathic character has remained at large for a long time. It can also build sympathy and rapport between the character and the reader if you can make the psychopath genuinely charismatic. If that’s what you’re going for.

Psychopaths tend to have a diverse criminal skillset.

This facet has to do with emotions, or in a psychopath’s case, the lack thereof. A psychopath might be emotionally shallow, lack remorse and empathy, and refuse to accept responsibility for their actions. In a novel, these traits might help explain why a character keeps doing horrible things, and help make that character more plausible.

Many psychopaths are easily bored, and need constant stimulation. They tend to live a parasitic lifestyle and lack realistic, long term goals. They can also be impulsive and irresponsible. Subtly adding some of these behaviors to a character can give the impression of a person with less restraint and control. For example, the psychopath who lives in my head (and only breaks laws on paper) tends to fidget and play with his switchblade when he’s supposed to be sitting still, because he’s impulsive and easily bored.

One of the largest indicators of psychopathy is a crime-ridden past. Psychopaths will often have behavioral problems when very young, and begin criminal activity early on. They can also be very versatile criminals, with a number of different illicit skills. This is one of the most useful points I’ve found when creating my own psychopath, because it gives you a sense of what the character’s history should look like.

Psychopaths have always fascinated me, and so I’ve created one of my own. I did a lot of research, but the most important lesson I learned was that it’s not a good idea to use these criteria as a character building checklist, and throw every trait of a psychopath at your character. No single person embodies all of these traits, and neither should a single character. Instead, I used this research to inspire a character that has some of these traits–probably enough of them to warrant a diagnosis–but is still unique.

For example, he’s got a superficial charm and a very inflated sense of self-worth, but he can be much more emotional than the average psychopath, and form deep relationships. He’s a lifelong criminal, stealing and setting fires from the time he was a kid, but he’s very driven by his long-term goals.

If you want to know more about psychopaths, you can check out the Wikipedia article (which links to a few more excellent ones), and Without Conscience, Robert D. Hare’s website about psychopathy. If you really want to get into it, Robert D. Hare wrote an excellent book based on his years of experience researching the topic, including many, many interviews and interactions with psychopaths. I’ve also written a blog post on personality testing that includes some tests to determine degrees of psychopathy.

In the end, writing a psychopath is fun. It’s a chance to move beyond conventional moral boundaries and experiment with a part of the human psyche we usually keep tightly controlled.

If there’s anything you’d like to add about psychopaths or the writing process leave a comment and let me know!

Update (October 2017) I just finished writing an entire book about psychopaths! If you’re interested, you can check out the blurb here, and sign up for my mailing list so you’ll hear when it comes out!

3 thoughts on “How to Write a Psychopath”