*Note: there are spoilers for Silent Hill 2 in this post. The game came out more than ten years ago, but I figured I should still mention it.

Today’s blog post comes from one of my favorite games, Silent Hill 2. Video games are a medium where writing is hugely important, and writers of fiction can learn a lot from both the well done and the poorly done games. Silent Hill 2 is one of the former, and these are some of the things that I found valuable as a writer from a close examination of the game.

The monsters in Silent Hill 2 weren’t just designed to be scary. They were designed as symbolic manifestations of the protagonist’s (James’s) subconscious demons. If that sounds highbrow for a video game, I assure you it fit seamlessly into the gameplay. There are a lot of lessons writers can learn from the way this video game was created and the thought that went into every aspect of it.

My favorite, and the most iconic of the monsters, is Pyramid Head. He wears a huge triangular helm made of rusting iron, and carries a sword of similar make, so heavy he must drag it on the ground as he walks. His movements are slow, but inevitable, and although the protagonist can conquer some of the lesser monsters, for most of the game he can’t defeat Pyramid Head. Instead, he must run away from every encounter. 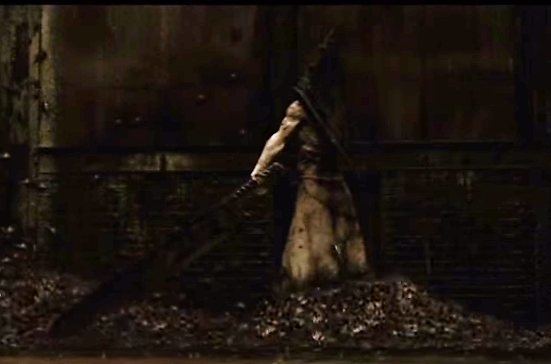 He can’t defeat Pyramid Head because he created Pyramid Head. The monster is a manifestation of his guilt and desire for punishment. Because he killed his dying wife, at her request, and because he resented her for the way her illness took over their lives, the most powerful of the demons inside him is guilt.

Pyramid Head represented James’s emotions, but his image, his movement, and his role in the game speak to the common experience of guilt. The creators of Silent Hill 2 took an intangible and made it tangible. Pyramid Head was a beautiful visual and interactive metaphor. Without him, James’s emotions would have been less powerful, less potent.

In writing, we’re often called upon to do the same thing. We have the word, ‘guilt,’ that evokes a human experience. But the word is too vague and imprecise to punch someone in the gut. It’s useful in conversation and therapy sessions, less so in art.

When I write an emotional scene, I often close my eyes and try to feel what my character feels. Their sorrow, their glee, and their guilt. I try to notice what it feels like in my body when I do, and what images, colors, and ideas come to mind when I’m in that place. From there, I try to bring that emotion to life.

It’s not just the way Pyramid Head looks that speaks to guilt. It’s the sound of his sword dragging behind him on the floor. The fight where you have to survive him, his invulnerability. The slow steady pace at which he chases you, the futility of running away from yourself. Every aspect of the monster comes together to make a cohesive idea.

I have a bad habit of mixing my metaphors, sending them flying without much method or control. There’s a lot I need to learn from Pyramid Head, and the game as a whole. I need to hold onto a central theme, and build up from there rather than pulling dissonant parts from all different places and trying to glue them together. A solid concept is necessary, for me, to make a final product that feels complete.

Pyramid Head is both familiar and unexpected, a new way to profoundly evoke an old feeling. And that’s what I’m always looking for.